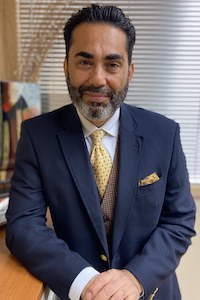 Anthony A. Fatemi, Esq. is the founder and principal of Anthony A. Fatemi, LLC, which was founded in 1999. Mr. Fatemi and his legal team practice in the areas of Immigration, Family Law, Criminal Defense, and Personal Injury.

In the area of Immigration, Mr. Fatemi and his legal team have extensive knowledge and experience in handling both business and family based immigration matters including adjustment of status, Naturalization, H1-B, PERM, and Investor’s visa (EB-5). Mr. Fatemi has also represented and defended hundreds of immigration clients who have found themselves before the immigration court for matters such as deportation, removal, and Asylum. Over the years, he has worked tirelessly to help his immigration clients fend off deportation and removal from the United States. Mr. Fatemi has played an important role in keeping many families intact, happy, and safe here in US.

Often clients need assistance in more than one area of law. For example, a person who is facing deportation proceedings before the immigration court, also may need assistance filing a Petition for Post-Conviction Relief or a Petition for Writ of Error Coram Nobis in state court because a prior conviction has triggered deportation proceedings. Clients who require assistance in several different courts and across several areas of law are comforted by the fact that Mr. Fatemi and his legal team are able to handle all of their legal problems. These clients don’t have to deal with the stress of finding a second attorney, having to communicate with two separate law offices, and worrying that one attorney may not fully understand what the other is doing.

In addition to handling post-conviction and coram nobis matters, Mr. Fatemi and his legal team also have expertise in handling a wide variety of criminal and traffic matters in both District and Circuit court including DUI, DWI, driving without a license, driving on a suspended license, possession of drugs, theft, assault, prostitution, rape, and many more criminal charges and traffic citations. He has extensive trial experience, but also has successfully negotiated plea deals with the Assistant State’s Attorneys if a plea is in the client’s best interest. Many of his clients have received no executed jail time, significantly reduced fees and court costs, and even probation before judgment (PBJ).

In the area of Family Law, Mr. Fatemi and his legal team have handled a wide variety of difficult and complex issues including identifying and valuing marital assets regardless whether these assets are located in the state of Maryland, domestic violence / protective orders, custody, child support, alimony, and divorce. Mr. Fatemi and his legal team understand that many of their clients were married overseas and need assistance in locating and filing for divorce from a spouse who currently resides outside of the United States. He has assisted clients whose spouses reside in El Salvador, Mexico, Iran, Iraq, and Thailand. Mr. Fatemi and his legal team also have extensive experience in drafting and negotiating voluntary separation and property settlement agreements and pre-nuptial agreements.

Over the years, Mr. Fatemi and his legal team have both settled and tried hundreds of personal injury cases, including automobile accidents, pedestrian accidents, and slip and falls. In total, these cases have resulted in millions of dollars being awarded to his clients all due to his persistence, dedication, and expertise.

Supreme Court of the United States
Member Since: 2016

Featured Pro Bono Activities
Non-Legal Activities
Contact Us
Practice Areas
Client Reviews
★★★★★
"Mr. Fatemi help with our accident case and did a really good job. I appreciate all his hard work" - I. Jose
★★★★★
"Thanks to the lawyer and his team, I was able to receive medical treatment because of my accident and they took care of the rest. Very happy with my reward and in the way they handled my case; very professionally. Thank you." E. Wilfredo
★★★★★
"Mr. Fatemi and his team is excellent. I had a very good experience with my divorce and immigration cases here. Excellent service; they kept updating me with the progress of my case and best advice. They always returned my messages on the same day. Mr. Fatemi and Mariah are awesome people! I can’t imagine having anybody else work on my case. Thank you!" S. Patel
View More
Submit a Law Firm Client Review